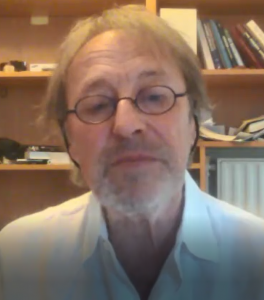 Renowned geopolitical and financial cycle expert Charles Nenner says don’t believe the Federal Reserve when it says it expects “the strong performance of the economy will continue.” According to Nenner, it’s about to go the other way—down. Nenner explains, “Definitely, later this year, the interest rates are going lower, and it could be much lower. We did work on all kinds of economic indicators. Employment is not going to be as good anymore as they say. Inflation is not going to be as strong as they expect. The commodity index is breaking down. Copper cycles are down. Crude oil cycles are down. Soon, everybody is going to wake up again and say hey, what’s going on? It is very interesting how Wall Street is approaching all the indicators. . . . If you do your homework, everything actually looks like the economy is weakening.”

How bad is this financial cycle going to get? Nenner is not afraid to use the “D” word. Nenner contends, “Still, the Fed talks like this could continue forever, and it’s the longest expansion. So, why do you think this time is going to be different? If you start with this low of GDP and interest rates and then you get to recession or depression, then you definitely get into at least disinflation.”

So, does Nenner see an actual depression coming soon? Nenner says, “Yeah, I have been saying that for many years. . . . Yes, if you look at the . . . long term cycles. Yes, we are going to a hyperinflation, but first, we are going to have a deflation scare. . . . We have one more scare of deflation before we get into real big inflation problems. It is a matter of timing. So, it could be a couple of years away.”

On gold and silver, Nenner thinks they both rise in price, but not until after a bit more pain for holders of precious metals. Nenner says, “Gold is going to enter a new bull market. The first cycle will bottom after the summer. $1,212 per ounce is our downside target. If it hangs around there and it’s after the summer, we will probably give it a buy signal. If that breaks, we will come up with a new low price target, but it definitely will enter a new bull market. Gold is in a bull market even though it came down from $1,900 per ounce. . . . It’s going to pick up anyway in a couple of months, but is it going to be from $1,212 or a lower price target?”

(This report talks about the coming downturn in the economy, Donald Trump and gold starting a new bull market.)

There is always some free information in CharlesNenner.com. If you want to get regular analysis from Charles Nenner, you can subscribe for a free trial by clicking here.