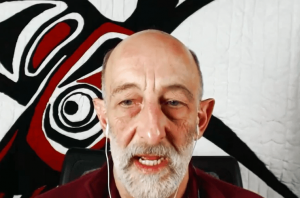 Internet data mining expert Clif High uses what he calls “predictive linguistics” to spot trends and make predictions for future events. In his latest in-depth report, High sees a “huge” calamity coming for humanity.  Clif High explains, “There is all kinds of data for money and lack of money and lack of funding and all kinds of emotions around this.  There are hints in the data that something huge is coming for August and September that is being exposed by the language now.  I think it’s a bond crash or not a bond crash because I don’t know how that works.  It’s not a stock market crash.  The data I am looking at now says the stock market is not meaningful.  We may lose 50 cents on every dollar in the stock market in just a few days, but it’s meaningless.  It won’t make any difference at all to anybody according to what the data is showing me because the real crisis is in the crash of government.”

High goes on to explain, “The emotions at the moment are projecting a crash of the ability of the state to function. . . . We have the projection that there is going to be some sort of big government crash. It concerns funding, interruption or something. . . . We have something akin to a definition change relative to bonds. . . . One way to think about this is there is going to be a human collective or re-understanding, or new understanding, about the whole bond market as we go forward in August, September and October.  This is going to cause huge disruptions for governments, which basically depends on the bonds as its source of funds.  I don’t know what that definition is going to mean, but the way the language is presenting itself, it’s very much like the same language that appeared in newspapers ahead of the Bretton Woods conference. . . . At that time, a bunch of countries got together around WWII and talked about how to deal with gold, money and the dollar after the war was over. . . . We have that same kind of language now relative to the bonds. . . .This redefinition is going to cause real problems relative to governments.  If I had to guess, I don’t think we will have a stock market crash, but a government crash or Fed crash or bank crash.  I don’t think a stock market crash will be meaningful because by the time it crashes, nobody will care because before we get there, the Fed will crash.  The Fed is the market.”

Maybe this is why Clif High is also seeing language that prices are going up for things like Bitcoin, gold and silver. Clif is seeing the term “gold fever” repeatedly.  He is also seeing the term “silver rush” for the white metal.  High contends, “The amount of pressure they have had to use to push down on gold and silver prices means when it starts to go up, there will be a bit of a flutter.  Then, they are going to push down harder, and then it’s just going to blow.  The language is suggesting that this is really happening around silver.”  High also says at some point in the not so distant future, prices will be rising so fast that “no one will be selling gold and silver.”

High says another thing he sees is chaos in politics and the economy, and he contends this is all part of the “first ever global government crash.”

(There is much more in the in-depth video interview.) 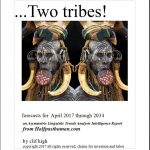 You can find Clif High’s latest report, which is 42 pages long, on HalfPastHuman.com. Just go to the site and scroll down to the latest report which is called “Two Tribes.”  The report is only $15 and there is a 100%, no questions asked, money back guarantee.