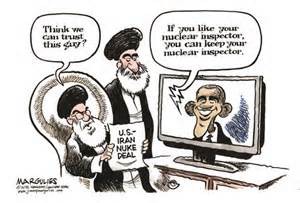 The deeper Congress digs into the deal to curb Iran’s nuclear ambitions, the worse the deal seems. When Secretary of State John Kerry, the key negotiator for the US in this deal, was asked about the secret side deals in Congress this week, he said he “did not have access to them.” What? You do not have access to details of a deal you negotiated? Kerry also says this deal must be passed by Congress, otherwise, he says, “our friends in this effort will desert us.” Now, details come out from a top French diplomat, who was also in on the negotiations, and he contradicts Kerry. French Senior diplomatic advisor Jacques Audibert has told Congress that if the deal is voted down, that eventually, they “could get a better deal.” When Kerry was asked about continued chants of “Death to America” in Iran, Kerry said he knew of “no plan to actually destroy us.”

Meanwhile, the Iranians are saying, once again, that the Obama Administration is misleading Americans about the deal in order to “calm opponents in the Congress and Zionist lobbies.”   Congress has 60 days to vote yes or no on this deal. There is no doubt the majority, and that includes some Democrats, are going to vote no. The only question is can Congress override a veto by President Obama?

Things are also heating up in the South China Sea as China claims the US is ‘militarizing’ the South China Sea. It is reportedly angered by US flights and patrols in waters it claims as its own. A Chinese defense spokesman said he wondered if the US wanted “nothing better than chaos.”

The spin doctors have revised the GDP in the first and second quarters. First quarter revised up to 6% after originally being negative, and now, the second quarter is revised up to 2.3%. Who knows how the more that 7% decline in new home sales were accounted for? According to Shadowstats.com, there was also the steep second quarter decline in durable goods. Economist John Williams says it’s the steepest since the 2008 economic collapse. So, is the Fed going to raise rates or not this September? I think we are getting to the real fork in the road, and that is if they raise rates, they collapse the markets. If they don’t, then the Fed and the dollar loses credibility and we still get a collapse, just a little later on. My friend Gregory Mannarino of TradersChoice.net tells me he thinks there is a plan to destroy the middle class because that’s where all the wealth is. In the end, there will be a two tier system consisting of the wealthy and all the rest of us. Mannarino contends when you are poor, you are easier to control.

USA Today finally responded to my asking why the allegations of Planned Parenthood were not covered much in their operation. They told me “USA Today has in fact covered the controversial video and claims made against Planned Parenthood” and sent me 11 links to their website. One of those links was an Op-Ed piece, so that does not count as reporting. Six of the ten were done in the last three days, and none of the stories they sent me appeared in the Gannett flagship enterprise USA Today newspaper. On the USA Today website, you had to search for any story on allegations of Planned Parenthood selling baby body parts. (Planned Parenthood continues to say it has done nothing wrong.) There were more than 40 other stories highlighted on their home “News” page when I looked. Front and center was the story about “Cecil the lion,” but the alleged misconduct and gruesome details about a federally funded institution selling baby body parts did not rate as high as the murder of a lion in Africa. This is too stupid to be stupid, and in my estimation, this story is being buried because it makes their far left liberal buddies they identify with look like medical Mengele monsters.