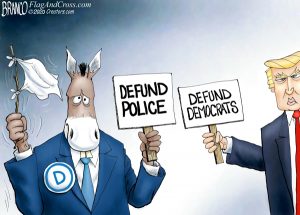 This is a classic battle of Good vs Evil.  This is nothing short of a takeover attempt by Marxist communist forces using tactics not seen since pre-WWII Germany.  This is not about reform, but total takeover, and no one should contradict the narrative.  Just saying “All Lives Matter” is considered a repugnant statement that should be punished.  No other opinion is wanted or allowed with this political maneuver that hides behind a veil of social justice and anti-racism.

Violent and heavily armed anarchists such as Antifa, and other groups supporting them, have taken over the City Hall of Seattle.  This outrageous action has the total support of the Mayor and the Governor.  This is how takeovers start.  This takeover of 6 city blocks in the center of the city is tolerated and accepted by people in power, and that includes top brass of the Democrat Party.  I view this as a trial balloon.  Evil wants to take this show on the road across America in an election year.

The DOW crashed 2000 points before recovering slightly this Thursday.  Is this an omen of things to come, or is the market simply telling us the economy is really not too good?  A new survey says about a third of all renters are afraid of not being able to pay their next rent payment.  Does that sound healthy to you?

Financial writer and precious metals expert Bill Holter of JSMineset.com will be the guest for the Early Sunday Release.