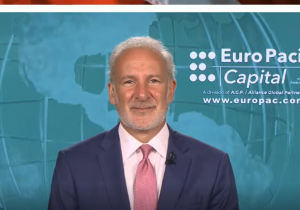 Money printing by the Fed and Congress is off the charts. The Federal Reserve doubled its balance sheet in a matter of months, and Congress is pumping out trillions of dollars in spending bills to fight the economic crisis caused by the Covid 19 lockdown. The really scary thing is not the massive money printing, but the fact that absolutely nobody seems to care about the risk to the U.S. dollar. Money manager Peter Schiff thinks he knows why, and explains, “(Back in 2008-2009,) even Larry Kudlow was worried about what the Fed was doing, but nobody is worried about it now.  The reason is they have been lulled into this false sense of complacency in that we got away with it the last time . . . and there was no negative consequence. We didn’t have runaway inflation and did not have loss of confidence in the dollar. So, there was no price to be paid. . . . Since we got away with it before, they think they will get away with it again, and I think they are completely wrong. . . .All we did was inflate a bigger bubble, but now this bubble has popped, and it found the mother of all pins in the Coronavirus that put a gaping hole in it, so the air is coming out much faster. Now, they are trying to reflate this thing. We are going to suffer the consequences, not only what we are doing now, but what we did back then. . . . When is all this inflation going to move out of the stock market and into the supermarket? I am surprised this has not already happened, but I do think we are at the end of the line. . . . Here’s what is going on. We are going to have this massive inflation tax. We are seeing price increases at the supermarkets.”

What has to break is the U.S. dollar, and that’s coming, according to Schiff, “We are going to overwhelm with dollar supply. We are printing all this money. The Fed is buying all these bonds. . . . This is it. The Fed is going all in on QE. There is no limit. They are printing all this money, and, so, ultimately, the dollar is going to tank. It hasn’t happened yet, but it will. That’s when the party really ends. That’s when there is massive pressure on consumer prices. That’s when there is massive (upward) pressure on interest rates. . . . This could be an inflationary depression. We could have hyper-inflation. We didn’t have anything like that in the Great Depression. During the 1930’s, prices went down, and people got some relief with lower prices. That made the downturn not as bad. Imagine high unemployment with the cost of living skyrocketing. That’s what we are heading for. It’s going to be the 1970’s only on steroids because it’s going to be a much deeper economic contraction with a much bigger increase in consumer prices.”

Schiff says, “When we reopen, nothing will be the same because we will not be able to reflate this bubble.”

So what do you do? Precious metals are a no-brainer investment. Schiff says, “It’s not that gold is gaining in value, it’s that fiat currencies are all losing value. Gold is the one stable factor. It’s the one thing governments can’t create out of thin air. Every currency in the world, except the dollar, are hitting new record lows against gold. You need more Euros, Rands or Aussie dollars to buy an ounce of gold. . . . The U.S. dollar is losing value more slowly, but this is going to change. We are going to win the race to the bottom. . . . People need to convert their dollars now into gold or silver. If you think the price of gold is going up now, wait til the dollar is the weakest of the currencies. . . . That’s going to accelerate the appreciation of gold . . . and that’s going to put gold in the spotlight as the replacement to the U.S. dollar as the main reserve asset for global central banks.”

There is much free information and articles at both of Peter Schiff’s websites, EuroPac.com and SchiffGold.com. You can also listen to Peter for free every week on The Peter Schiff Podcast.