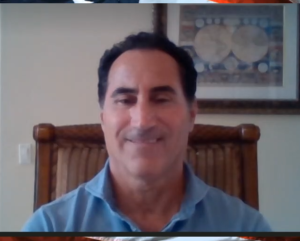 In June, economist and money manager Michael Pento warned the Fed was going to kill the economy by “tapering” the easy money policies.  Instead, the Fed ignored inflation, which is obviously not transitory and has kept the money printing going.  Now, Pento says it’s coming down to one issue for the Fed.  Pento explains, “If the Fed does not taper, yields will skyrocket.  That will destroy the economy and kill the real estate market.”

Pento goes on to point out how bad inflation from trillions of dollars of Covid money printing really is in the real world.  Pento explains, “Why work and get exposed to Covid 19 when they can stay home, do noting and buy stuff online.  That’s your real problem.  That’s why you have inflation, if you measured it accurately, close to 14%. . . . Almost 14% inflation, that’s the highest we have seen in 40 years.”

Don’t expect China to get the global economy going like it did after the 2008 meltdown either.  Pento says, “What they cannot do is repeat what they did in 2008.  The global economy is slowing.  It’s going to go over a massive fiscal and monetary cliff, the biggest since WWII, and there is not a darn thing China can do about it.  They can ring-fence the problem with Evergrande and other construction and real estate companies.  They cannot tell the Chinese citizens home prices are already stalling and falling because of the over-built condition of the bubble.  So, we are going to go on an expedition to build more?  No, you cannot.”

When does Pento think the markets will come under big downside pressure?  Pento says, “The average amount of money printed by Mr. Powell and given to Wall Street to gamble with in the stock market is $250 billion each and every month.  That’s the average, and that’s going to zero by June of 2022.  That is the biggest monetary cliff we have ever seen heading into an economy already suffering from stagflation.  If you wanted to kill an economy, you would perpetuate inflation, threaten to raise people’s taxes and you would raise the cost of borrowing, in other words, raise interest rates.  All three of those things are happening. . . . The odds of a major liquidity crisis happening in the first half of 2022 should lead to a stock market decline and the freezing of the repo market, credit market and the Fed Funds market. . . . A credit market crisis is a Siamese twin to a stock crisis.”

Pento predicts that if the Fed comes back in with another round of money printing, “interest rates are going to go bonkers to the upside, and that’s what I am watching. . . . This is not going to end well.  The salient fear out there is a stock market collapse and a liquidity crisis.”

(There is much more in the 47 min. interview with Michael Pento.)