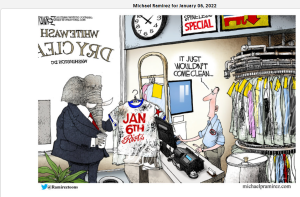 I predicted at the end of 2021, the narratives would collapse with the vax, voter fraud and economy propped up by the Fed.  I did not realize the collapse would happen at this speed, but it has. There is more bad news with the vax injection narrative.  The sick are overwhelmingly the vaxed, and now more autopsies have been done on the injected that show 93% in one study died of the CV19 so-called vaccinations. The vax attacked the body and all its organs, including the heart 100% of the time.  The doctors that performed the autopsies have never seen this before.

More is coming out with voter fraud from the 2020 Election season.  One whistleblower says he was paid $10 per ballot to rig the election for the Democrat candidates for Senate in Georgia.  The whistleblower says 240 other people did the same thing in the Georgia runoff for Senate, and that adds up to $11 million in illegal money and voter fraud to throw the Senate to the Democrats.  New information is coming out almost every week, and the fraud is being cut off by state legislatures.  The Dems are panicking and trying to change the voter laws on a national level to make legal their fraud of 2020.

Minutes of the Fed meeting in December are out, and the Fed looks like it is worried enough about inflation to do something about it.  They can stop the money printing and kill the economy, or they can go full speed ahead with debt monetization and kill the U.S. dollar and probably kill it as the reserve currency of the planet.  Tough choice and both are bad.  You best be ready and that means own your stuff and cut back on the risk.

Join Greg Hunter of USAWatchdog.com as he talks about these stories and more in the Weekly News Wrap-Up 1.07.22.

Top Covid expert Dr. Pierre Kory of the Front Line Covid-19 Critical Care (FLCCC.net) Alliance will be the guest on the Saturday Night Post.  He will talk about the FDA cut-off of life saving drugs and increasing deaths of the vaxed.  He will also talk about the dangers the unvaxed are still facing from the vaxed.