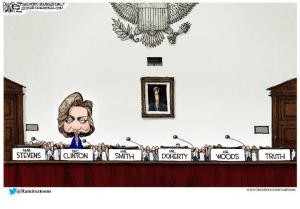 The biggest headline this week came from Sochi, Russia, and it plays right along the increasing war theme. Vladimir Putting is worried that the chances of a wider global war are increasing and not decreasing. At a global conference discussing war and peace prospects, Putin said, “We had the right to expect that work on development of US missile defense system would stop. But nothing like it happened, and it continues. This is a very dangerous scenario, harmful for all, including the United States itself. The deterrent of nuclear weapons has started to lose its value, and some have even got the illusion that a real victory of one of the sides can be achieved in a global conflict, without irreversible consequences for the winner itself – if there is a winner at all.”

Russia is stabilizing the Assad regime in Syria. Russia war planes have been pounding the so- called Syrian rebels and, for the most part, the U.S. is going along with it. The U.S. and Russia have set a deal that will ensure there will be no accident in the air between the two countries in the skies over Syria. Meanwhile, the battle for Aleppo in Syria is raging. Without airpower, the probability of victory for the rebels is dim. This doesn’t mean everything will be over soon, quite the contrary. Saudi Arabia and every other Sunni Muslim country is vowing to send more resources against Iran and Hezbollah, who are providing most of the foot soldiers in the Syrian war. The latest country to threaten to get involved militarily is Qatar. Why is this important? The U.S. has a military base in Doha. If Qatar goes on the offensive in Syria, it leaves them open to attack. Of course, that could involve the U.S. The same is true for other countries friendly to the U.S. such as Turkey and Saudi Arabia, who all are not happy with Iran’s involvement in Syria. Oddly enough, Israel has quietly opened up a hot-line with Russia. Reuters is reporting that an unnamed high ranking Israeli source says Russia’s intervention in stabilizing Syria, leaving Assad in place, is “not necessarily bad” even if it does involve Iran and Hezbollah. The long short story is things will get much worse in the Middle East before they get better.

Hillary Clinton testified in the Benghazi hearings on Capitol Hill, and my take on Ms. Clinton’s testimony is security was not her job. She is not responsible for the death of four Americans. It was a highly partisan hearing. It did reveal a stunning new fact, and that was Clinton herself, while Secretary of State on the night of the 9/11/12 attack and the day after, said it was “al-Qaeda related” and “had nothing to do with the (anti-Islamic) film.”   In her own words, she knew it was a terror attack right from the beginning and lied with the Obama Administration to the world. That was a stunning revelation. This is not her biggest problem. Her private unprotected email server, along with possible felony criminal charges under the Espionage Act, is her big problem. The FBI is investigating this and is not talking. Legal experts contend other possible felony charges for Ms. Clinton or her staff range from perjury to Obstruction of Justice.

Finally, the economy is tanking and, yet, the stock market is in rally mode. The headlines are awful week after week, and that is good news for the markets. Traders think the Fed will be forced not to raise rates, especially with the ECB hinting at more money printing and negative interest rates. Gregory Mannarino of TradersChoice.net says this rally won’t last, and it is being propped up with “financial wizardry.”

Join Greg Hunter as he talks about these stories and more in the weekly News Wrap-Up.