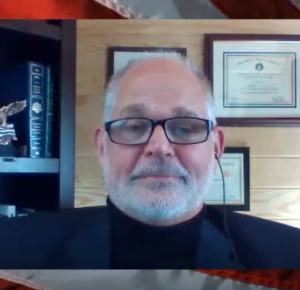 Former CIA Officer and whistleblower Kevin Shipp says the Russian hoax and attempted coup of President Trump and the sex trafficking case against Jeffery Epstein are linked together by the same Deep State players. Shipp explains, “The FBI has completely raided his vault, and they have some pretty damning material. I don’t know why it took so long, but they have raided Epstein’s island . . . So, there is a lot of damning information the FBI has now on certain people. At the top of the list, and the one who flew the most, was Bill Clinton. Then he lied about it. They are intertwined in that regard and with the Clinton Foundation that we know is a fraud. It is known around the world, and you’ve got these two intersections with Bill and Hillary Clinton. Of course, Hillary Clinton is tied to the dossier in an attempt to get rid of Donald Trump. So, these webs interlocked with each other, and these people interlock with each other. Welcome to the global elite. Welcome to human trafficking. These things are connected, and with Epstein dead, there are a lot of prominent people breathing a sigh of relief—for now. Is Barr aggressive enough? He says he is going to pursue this case anyway. Is he going to call in the people seen on the CD’s, videos and photographs? That remains to be seen.”

On Epstein’s officially ruled suicide while in prison, Shipp says, “Epstein tries to commit ‘suicide,’ and his cellmate, a four-time convicted murderer, said he didn’t see (or hear) it because he had his headphones on. Attorney General William Barr was in charge of the safety of Jeffery Epstein. There should have been an entire contingent of U.S. Marshals to protect this huge witness, but there were none. Why is that? . . . . It is just unbelievable how they left this huge witness to die in prison. The prison guards were off, as we know. The cameras were not functioning. He was taken off of suicide watch and on and on we go. There are so many things that add up to this not being a suicide that it is remarkable. . . . We are all still hoping that Attorney General Barr will do his job and people are charged, but this is starting to bother me a little bit. A major witness that was connected to high level people in government and finance was left alone to die in prison, and I think he was murdered. This was all left to happen by William Barr. The pieces to this just don’t add up. . . .We’ve got so many strange things going on here that do not add up, and Attorney General Barr is ultimately responsible for this happening.”