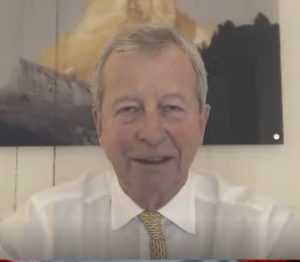 Financial and precious metals expert Egon von Greyerz (EvG) says don’t expect the global financial situation to get better anytime soon. EvG says, “You know what the politicians are doing now? Theresa May is my best example. These politicians are just running around posing and acting, but they are not achieving anything, and they are not achieving anything because the world is in a mess. What we are seeing the beginning of is the decline of the western world economy, which means the whole world economy. . . . There is no use in putting a time period on it, that it’s going to happen this year or next year. The trend is clear. We know that the world economy is in a mess. It’s going to decline, and in my view, it’s going to be a rapid decline. . . . Gold will reflect all of this, and currencies will be totally debased. . . . You don’t need a lot, you might only need another few snowflakes to trigger this avalanche. It could come in a month or in three months time because the system is a fake system. . . . I count $2 quadrillion in money. If you add debt, unfunded liabilities and the risk of derivatives, you come up to $2 quadrillion of debt and liabilities. The global GDP is $70 trillion. . . . So, you are talking about 30 times global GDP.”

What could go wrong? EvG says, “You don’t need much to go wrong. It will happen. They have no remedy anymore. 2007 to 2009, I have said many times that was a rehearsal. The real thing is coming now or in the next few years, and no money printing will ever stop it. They will try, but they will fail. This is why you will get the depressionary hyperinflation, and when that fails you get the implosion of the system. All values will shrink to very low numbers, all assets and debts will shrink together. That is the longer term play. It’s not going to be nice for the world. It’s going to be horrible for the world.”

In closing, EvG says, “Because of the artificial control of the system, the cycles becomes ten times or a hundred times bigger than they would have been by natural forces. We have had a hundred years of excesses in the world and artificial wealth creation. Now, in the coming years, we will have a very long period of the opposite. Wealth will disappear. A lot of people will suffer, and, sadly, there will be famine. There will be misery. The world has gone through this before, but this will be bigger than it ever has been. The world will survive this, but there will be a lot of suffering when this implodes. . . . The fear hasn’t started yet, but it will, and then there will be a rush into gold and silver. Our clients are increasing their positions. . . . In my view, 25% of total net worth is the minimum (to invest in gold and silver), and, personally, I would not have any major assets in the bank because I don’t think the banking system will survive. If it survives, it will not be in its present form. Stocks, in relation to gold, will go down 90% to 95%. They went down 90% in 1929 to 1932. . . . There will be the most massive wealth destruction ever.”

Join Greg Hunter as he goes One-on-One with Egon von Greyerz of GoldSwitzerland.com.

There is free information, articles and analysis on GoldSwitzerland.com.