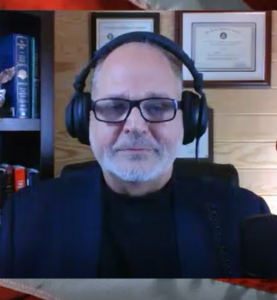 President Trump’s frustration over lack of criminal Deep State prosecutions by his DOJ bubbled out to his more than 70 million Twitter followers this week. From Comey, McCabe, the phony dossier of the Russia Hoax and FISA abuse, it was all put out for the world to see. Trump called the Mueller report a “fraudulent investigation,” and Trump also tweeted, “….badly tainted . . . . Even Mueller’s statement to Congress that he did not see me to become the FBI Director (again), has been proven false. The whole deal was a total SCAM. If I wasn’t President, I’d be suing everyone all over the place…”

If prosecutions were getting done, President Trump would not be threatening to sue, says former CIA Officer Kevin Shipp. Shipp goes on to say, “What the President is doing is tweeting and communicating with the American people because the press is going to cover it up, and the Deep State is not going to let that sort of thing out. This is the beauty of his tweets . . . . He is telling us what is really going on. . . . These prosecutors, going all the way back to Mueller . . . have engaged in prosecutorial misconduct, and nothing has been done to them. This has been allowed to go on, and Trump is basically saying the evidence and information is there that is solid enough that he could sue if he wanted to . . . . The American people need to know about it, and when the American people know about it, people get up in arms and people start taking action. . . . . We, the American people, need to hold Attorney General Barr accountable for doing his job. We are all hoping AG Barr and John Durham are going to do their jobs, but what we have seen lately is quite concerning.”

There is no doubt some investigations are going on, but it appears factions of government are battling each other. Shipp, who is an expert in the Shadow Government and Deep State, says, “Having been in there, especially between the FBI and CIA, I saw internal wars. They are brutal between agencies and the FBI, CIA and DOJ. There is a brutal war going on within the government, and ruthless stuff going on in terms of actions. . . . The one investigation I think is going to happen, and then one investigation that will lead to indictments, is the investigation into Hunter Biden and his role in Ukraine and not just Ukraine, but his role in China and the $1.5 billion given to Hunter Biden’s company. We will see some indictments there, but there is a war within the Deep State. This has been going on since Trump was elected. The Deep State is going crazy, and the rats are jumping off the ship. This is what I love about President Trump. . . . No President has confronted the Deep State in history like Donald Trump with the exception of JFK, and that did not work out well for him.”

As far as the so-called whistleblower that started the impeachment hoax, Shipp says, “Call him in. He is not a whistleblower — period. The evidence is there that he is not. Bring him in and question him because he was an operational plant originally put in the White House under John Brennan (former CIA Director) under Obama. He was back in the White House in the Trump Administration, and they missed him, and then he engaged in an operation against the President of the United States with a false whistleblower report.”

The whistleblower’s boss, CIA Director Gina Haspel, is in on the operation and impeachment hoax, according to Shipp. Shipp says, “Haspel would have taken administrative penalties against him. She would have come out publicly and decried what he did, and she has done none of that. . . . In my opinion, it indicates she is supporting it, yes.”