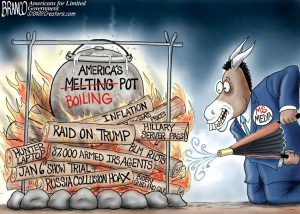 It’s another phony investigation into everything Donald Trump to try to make up another fake crime.  They are so scared Trump will take control of America again the Dem Deep State globalists are doing everything possible to try to derail President Trump.  AG Merrick Garland does not want to even reveal the contents of the affidavit that allowed the FBI to ransack Trump’s personal Florida residence nearly 2 years after he moved out of the White House.  Why the secrecy?  They are simply making it all up as they go along—again.  Shame on the DOJ, and double shame on the FBI for trying to frame Trump–again.

Liz Cheney is a registered Republican that says she voted with President Trump 93% of the time.  I guess voting for Trump’s impeachment for yet another made up crime just does not count as disloyalty.  Trump had the last laugh by supporting Harriet Hageman in the GOP primary for the only House seat in Wyoming.  Hageman destroyed Cheney, and that marks the eighth House Republican who voted to impeach President Trump to be removed from office.  Cheney now says she is going to run for President in 2024—I know you are laughing, but it’s not a joke.  It’s more like an embarrassing delusion for Cheney, who is now worth more than $30 million.  That’s some strong savings with only a $174,000 a year Congressional job.

Enjoy the slightly lower gasoline prices while you can because all indications are inflation is coming back with a vengeance right along with some sort of market crash.  How can both happen?  It all hinges around the dollar remaining the world’s reserve currency.  If Saudi Arabia (SA) ends up joining the so-called BRIC countries, you can kiss the US dollar good bye.  That means SA will no longer sell its oil exclusively in dollars, and the dollar will tank because many will not need to have them to buy oil.  Is this why the Fed is hell-bent on raising rates and fighting inflation?  Is the Fed really just protecting the dollar?

There is much more in the 59-minute newscast.

Join Greg Hunter of USAWatchdog.com as he talks about these stories and more in the Weekly News Wrap-Up for 8.19.22.

Bill Holter of JSMineset.com is coming back on as time is short for a very big financial shakeup this year.  Holter will give us an update on the coming financial crash.