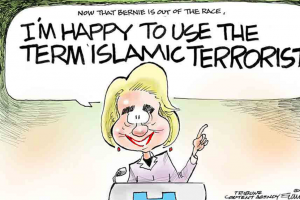 There is no wonder why Democrats want to talk about gun control. The Islamic terror is increasing, and the Democrats provide lip service.  Now, the Democrats want to disarm America in the face of rising violence from radical Islam.  The Obama Administration would like you to believe that these terrorists are “self-radicalized.” In many cases, that is not the true story.  There is a percentage of mosques in the U.S., according to the FBI, that teach and encourage violence and jihad.  According to several different whistleblowers and reports, the Obama Administration has been shutting down investigations into radical Islam and, in some cases, scrubbing suspected terrorists from data bases.  President Obama has repeatedly said that ISIS is on “defense,” but his own CIA director, John Brennan, said in Congress, this week, ISIS is “formidable and resilient.” Brennan warns that ISIS is not only training more fighters to attack America, but ISIS will likely get into the country posing as refugees from Syria.

The economy is so weak that, once again, the Federal Reserve cried wolf on raising interest rates and did not do it. Gregory Mannarino of TradersChoice.net told me, “The Fed cannot raise rates—ever. Next step is for the Fed to buy corporate bonds to suppress interest rates even more.”  Some other signs the economy is in deep trouble come from Walmart, America’s largest retailer.  They are laying off 1,500 people at 500 stores.  Bank of America, the largest retail bank in the U.S., is laying off 8,000.  If the economy was growing, would the biggest retailer and the biggest bank be laying off people by the thousands?

Donald Trump answered President Obama’s criticism this week by saying, “Obama is madder at me than the Islamic terrorist that just killed 49 people in Orlando.” Trump is also continuing to fight bias in the mainstream media (MSM).  The Trump campaign revoked the press credentials of The Washington Post after it ran a false headline that read “Donald Trump suggests that President Obama was involved in the Orlando shooting.” This is why Trump continues to call the MSM “liars.” It may also be the reason that trust in TV news and newspapers just hit an all-time low in a new Gallup poll.