Home
»
Political Analysis
»
Will the Bad Economy Cause Crime to Increase?

Over the past 15 years or so, violent crime and property crime (theft) has been on a slow steady decline.  According to the Bureau of Justice Statistics, in the past few years, that decline has leveled off.  Part of the decline has been attributed to a good economy in most of those years.  Part of the decline can also be attributed to good police work and fully staffed departments. 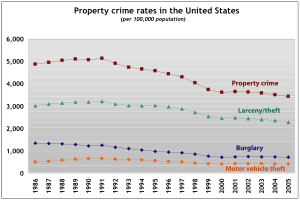 I don’t think the trends in these graphs are going to continue.  It appears staffing levels for police departments across the country are changing for the worse.  Cities and states all over the U.S. are facing a bad economy and plunging tax receipts.  They can’t print money, so budgets need to be cut.  Even the police are on the chopping block.  Goggle the term “police layoffs,” and you will find talk of cutting back on law enforcement from Detroit to Dallas and from Los Angeles to New York

City.  (Recently, NYC Mayor Michael Bloomberg took cutting thousands of police jobs off the table for next years budget, so cops there are safe for now.)

The economy is looking like it’s going to take another downturn with increased unemployment and millions more home foreclosures coming.  So, are the people going to still be safe with a reduced police presence?  Maybe not, and here is a perfect example of what I am talking about.  The sheriffs department in Ohio’s largest county just cut the number of deputies it employs in half–from 112 to just 49.  A judge in that county is very concerned for the safety of its residents.  Here’s how the AP reported it last week:  CLEVELAND — One judge’s solution for citizens feeling less secure because of budget cuts in an Ohio county: Carry a gun.  Judge Alfred Mackey of Ashtabula County Common Pleas Court advised residents Friday to be vigilant and arm themselves because the number of deputies has been cut about in half because of a tight budget. He also urged neighbors to organize anti-crime block watch groups.  “They have to be law-abiding, and if they are not familiar with firearms they need to take a safety course so they are not a threat to their family and friends and themselves,” Mackey said Friday. (Click here for the complete AP story.)

Don’t worry, the world is not going to change overnight; but by 2014, Trends Research founder Gerald Celente says, “You’re going to see major cities (in the U.S.) look like Calcutta . . . You are going to see crime levels that are going to rival that of a third world country.”

Celente, who has made many correct predictions, says what America is facing is the “Greatest Depression” which will be much worse than the Great Depression because of high debt loads facing individuals and governments.  Don’t take my word for it, listen to Celente in the video below as he talks about his predictions for 2010:

Here is another insightful video with Celente: