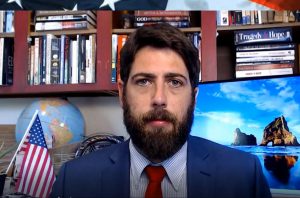 Journalist Alex Newman says the so-called protests around the country are really well funded riots and attacks on the foundation of America.  It’s as much about thought shaping as doing damage and wreaking havoc.  Newman says, “What we are seeing here is a well-orchestrated and engineered psyop. . . . It’s a psyop of massive proportions. . . . Obviously, Soros is big into funding these things.  He’s been funding Antifa and Black Lives Matter (BLM).  We have documents that were hacked from Soros’ Open Society Foundation back in 2015 where they were pouring hundreds of thousands of dollars into this movement for black lives before there was even a Black Lives Matter organization.  They said they were going to create a national movement that was going to try to undermine local police.  They were going to redistribute wealth, and this is from their own documents. . . . CNN and MSNBC have this crazy psyop going, and everything they want to tear down, Christian civilization, America, liberty and our Constitution, are all white supremacists, and if you defend those things, you are a defender of white supremacy.  It’s an obvious lie, but if you are not thinking straight and you’ve been brainwashed in the public school system, maybe you will fall for it. . . . I think what we need to understand here is that we are in a war, and most everyday Americans have not figured it out.  We are definitely going to lose if we don’t figure this out, but the other side is waging a war on us, and they are playing for all the marbles.”

Newman goes on to say the entirety of “mainstream news is one big psyop.”  Newman explains, “They are manufacturing hysteria, fear and lies about racism.  We are in a war, and a psyop is a tactic used in war by military forces trying to demoralize a population.  We are in a war right now.  The enemy is using war tactics, including psyops, and I think it will result in a cratering of public support for pro sports, but they don’t care.”

The Democrats have become the anti-God party.  They believe in a black hole of nothingness.  Newman says, “Marxism is worse than a black hole of nothingness.  When you distill Marxism down to its essence, it is a complete and total repudiation that God revealed to us in his word and everything that God has written in our hearts.  God, for example, is the author of private property.  He said ‘Thou shalt not steal.’  So, the Marxists say you have to abolish private property.  Marxism is based on coveting.  You have something better than what I have, so I want to send armed men to your house to take it from you and give it to me.  Marxism, at its core, is coveting other people’s stuff.  God tells us ‘Thou shalt not covet.’  God gave us the family, mother, father and children.  Marxists say we have to dismantle the family, and women should be held in common.  If you really want to understand Marxism and what these people have been convinced to kneel for, it is a total repudiation of everything good and everything right.”

Newman thinks that today’s Marxist Democrat Party will ultimately resort to mass murder to get their godless utopia.  Newman says, “Is this going to work?  Can they get most Americans to believe this stuff?  Unfortunately, it’s been very effective so far. . . . I think they are preparing for the final phase in this, and we know what the final phase is.  The FBI agent that infiltrated the leadership of the Weather Underground, Larry Grathwohl . . . they explained to him that once they overthrow the system . . . they were prepared to exterminate 25 million Americans that would not or could not be reeducated.  So, that’s where we are moving.  It’s taken them a lot longer than they expected.  The public school system, combined with the fake media, combined with the popular culture and entertainment, is very effective.  Whether they succeed or not is still very much up in the air.  We have got to fight like our lives depend on it, like our liberty depends on it, like our nation, our family, our church depends on it–because it does.”

Newman says rescuing our children from public school education and Marxist indoctrination is the most important front in this war to save America.

Join Greg Hunter as he goes One-on-One with journalist Alex Newman, Foreign Correspondent for The New American Magazine and founder of LibertySentinel.org.

Here is his article about “What’s Really Behind the Riots.”

Here is his article about “Rescuing our Children.”