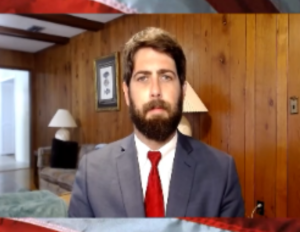 Award-winning journalist Alex Newman, author of the popular books “Deep State” and “Crimes of the Educators,” says Deep State globalists had a two-week conference in Egypt called COP27 that outlined the plan to enslave the planet with a New World Order globalist agenda.  It was a huge conference in mid-November that most Americans knew nothing about because the Lying Legacy Media (LLM) would not cover it.  Why did the LLM lie by omission and not show Americans what was going on when the entire world covered this conference?  Newman, who attended COP27, contends, “This is an incredibly significant story, and anywhere else in the world you would have seen very extensive coverage in the press, in the fake news media as we call it.  There were thousands of journalists there.  I call them the cheerleading section from all over the world.  Conspicuously absent, though, was the American media. . . . If Americans knew what was going on . . . they would put a stop to it almost immediately.  So, there was almost total radio silence in the U.S.  This was very, very significant because you had 125 prime ministers, kings, dictators and presidents, including Joe Biden, show up.  I actually ran into John Kerry there, and he was not very talkative. . . . It was just Americans that were kept totally in the dark about this.  This was the most significant thing going on in the world until the G-20 started. . . . There were world leaders from all over the planet.  We are talking about wealth redistribution.  We are talking about stealing money from middle-class and poor Americans and redistributing that to the very wealthy, uber elites and the kleptocrats who have kept the third world impoverished.”

It is more than a money issue.  Newman says it is really a freedom issue.  Newman explains, “They are very clear about using the WHO (World Health Organization), the climate change process . . . all these different arms getting together to take down freedom around the world and ultimately take down the American system of government.  Trump comes in and pulls out of UNESCO, a UN education agency.  These are the same people involved in the one world religious new kookie 10 commandment thing.  Trump got us out of that, and it was a wonderful move.  He started the process of getting us out of the Paris Agreement.  He got us out of the World Health Organization.  Trump was a human wrecking ball when it came to the architecture of global governance. . . . Trump stood up at the UN and said we are not going to go for the globalism anymore.  America is going to be a free sovereign nation. . . . When it came to globalism, Trump was on fire, and he was doing incredible things.”

Newman says this is one of the reasons globalists had to make Trump lose the 2020 Presidential Election.

Newman also says, “They were talking over and over again about ‘climate hell.’  What they are really trying to do is build hell on earth under the guise of saving us all from climate change.”

In closing, Newman says, “They are trying to bring all the religions on earth on board. . . . They want to get all the religions together and create an ‘alliance of virtue.’ . . . We are seeing the nucleus of the one world diabolical religion coming into view.  As you study what is happening here, you realize this does not glorify God.  This flatly contradicts the Bible from the Christian perspective that has been delivered by God through the Bible.  Frankly, it is evil. . . . . This is a recipe for global tyranny, and God is the author of liberty.  These things are obviously not compatible.  In Ephesians 5:11, and this has been my motto as a journalist for many years, it says have no fellowship with the unfruitful works of darkness.  Rather, reprove them and expose them.  Christians should be exposing this. . . . The more you dig into the UN’s view on religion, the darker it gets. . . .They worship the creature rather than the creator.  This is what we are seeing in front of our eyes right now.”

Be on the lookout for Newman’s new articles in The New American in early 2023 as he reveals the globalist tyrannical plan to rule the world.

For a copy of the popular book “Crimes of the Educators” click here.

Newman also has his own website called LibertySentinel.org.  There is lots of free information and articles there.  Newman is a prolific writer and content creator.