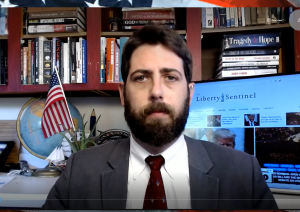 Journalist Alex Newman says don’t let all the calls for President Trump to step down fool you into thinking Trump is a one term President.  The Deep State Democrat globalists never imagined Trump would fight this hard against the massive election fraud that made Biden the pretend president.  The Deep State is freaking out, and this is why so many on both sides are calling for Trump to give up.  He’s NOT going to simply give into massive fraud.  Newman says, “I think the Deep State is very, very concerned about what President Trump might be thinking.  The President is clearly promising to fight. The media completely ignored it, but the President just put out a video on December 22 that says look, I am going to use every legal and constitutional means at my disposal to make sure that this election is not won through fraud. . . . He’s not going anywhere, and he’s not going to be giving up simply. . . . When you read the Constitution, Trump has an obligation to act here. . . . In the Constitution, it says the United States is obligated to guarantee a Republican form of government.  That means we have the rule of law. . . . That means what happened in these states where the vote was just blatantly rigged has to be addressed.  We had bureaucrats, judges and governors changing the rules of the election so they could commit fraud.  All of that needs to be stopped, and the U.S. government has an obligation to step in.”

There are multiple court cases sitting in front of the U.S. Supreme Court.  Will the judges rule against the fraud?  Who knows, but if they don’t, the President can act using something called the “Insurrection Act.”  Newman explains, “When you read the Constitution, the Founding Fathers saw fit to authorize the U.S. government to call up the militia or the U.S. armed forces into federal service when there was an insurrection or even to enforce the laws of the Union if necessary.  It is spelled out clearly in the Constitution. . . . Congress delegated that authority to the President under the ‘Insurrection Act’ under President Thomas Jefferson.  That has been upheld as constitutional and has been on the books for over 200 years.  So, in a worst case scenario, President Trump still has options.”

No matter who is crowned the winner of the 2020 Election, Newman predicts much stress and consternation in 2021.  Newman points out, “There really is not a happy ending.  No matter which course we take here, there is going to be a lot of turbulence.  If Donald trump manages to stay in, the Deep State will explode.  They will send out their terror mobs.  They will try to crash the economy.  They will try to destroy the value of the dollar.  They will get the fake media to call him a dictator.  They will get the United Nations to condemn this undemocratic coup. . . . It will get intense and very serious very quickly.  If Biden manages to get in there somehow through fraud, it won’t be smooth sailing either.  In fact, the party told us what they are going to do.  They are going to try to pack the Senate . . . They are going to legalize tens of millions of illegal immigrants and put them on a path for citizenship.  Almost all of them will vote Democrat.  They are going to pack the Supreme Court with new Marxist anti-American judges.  America will become completely unrecognizable if these people get their way. . . .  This is a very dangerous time for America.”

In closing, Newman says, “Superficially, it looks like a battle between swamp monsters and Marxists against patriotic Americans, but ultimately what is going on here is a battle between people who despise God, and this includes their commander in chief Satan, against people who still love and believe in God. . . .It says in the Bible, on multiple occasions, that God is the author of liberty.  It says where the Spirit of the Lord is, there is liberty. . . . That’s the simplest way to define what is going on. . . . Whatever God says, whatever the Bible says, the Deep State monsters want exactly the opposite.”

Join Greg Hunter of USAWatchdog.com as he goes One-on-One with Alex Newman, founder of LibertySentinel.org.

Newman also has his own website called LibertySentinel.org.  There is lots of free information and articles there.

To read Newman’s latest article about the coming chaos in 2021 no matter who is crowned the winner of the 2020 Election, click here.

To support Alex Newman with donations or buy other products, click here.