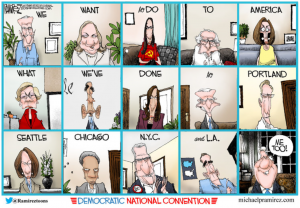 If you watched the Democrat Convention that nominated Joe Biden to be their candidate for President, you saw firsthand a hateful and gloomy presentation. It was not a ratings getter, and Biden had 20% less ratings than Hillary had in 2016. The entire group was America hating and communist loving with Marxist ideas such as defund the police, do away with all prisons and give free stuff to everyone. Democrats and their Black Lives Matter and Antifa lackeys want nothing short of an overthrow of America, our freedoms and our way of life. Contrast this with the GOP Convention that talked about freedom, opportunity and law and order in the wake of massive riots in Dem controlled cities that Dems refuse to even acknowledge. The fight in November is a fight between tyranny and freedom. At the White House Thursday night, President Trump, in his acceptance speech for the Republican nomination, said this was “the most important election in our nation’s history.” He’s right.

Democrats are so desperate that they have revealed themselves and their true feelings and dreams of total destruction of America. Evil is being revealed everywhere from Hollywood to the baseball field. This is what the riots are about, and it will only get worse from here to election day. This is backfiring for the DNC as many independents and Democrat voters are going to want law and order and vote Republican and for President Trump.

The stimulus deal to combat the Covid shutdowns is stalled in Congress. Speaker Pelosi has cut her demands but still wants $2.2 trillion, including hundreds of billions to bail out Dem controlled cities that have been burned to the ground. Don’t expect any deal until the end of September–if there even is a deal.

Journalist and book author Michael Snyder will be the guest for the Saturday Night Post. He will talk about his new book called “Lost Prophecies of the Future of America.”