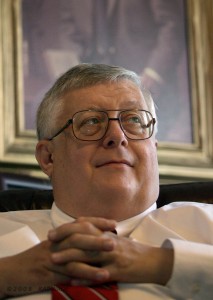 Economist John Williams has long predicted the $16 trillion in U.S. dollar assets held outside of America will be sold in a panic. The time draws near for that scenario to unfold, and Williams explains, “When people start selling the dollar, or dollar denominated assets, you will see the value of the plunge.  We have had a remarkable rally in the dollar since mid-2014, and it is up over 30%.  It is going to be going down by more than that, and we are going to be headed to new lows.  We have the waffling of the Fed and the beginnings of the perception that the economy is in serious trouble, which generally would be negative for the dollar.  We have started to see selling pressure on the dollar.  It has been inching lower.  It’s down year to year now. . . . The selling is going to intensify, not only with large central banks, but with corporations that will be beginning to dump their Treasury holdings. . . . Nobody wants to be the last one out the door when you have a panic like this.  It’s not a panic yet, but the potential certainly is there.”

Williams also says, “The dollar will blow up, and when I say blow up, it will collapse. There will be panic selling of the dollar, and that will intensify the inflation.  The problem is they don’t have a way of avoiding it.  If they could somehow get the economy back on track, they would have some room to work, I think, but the economy has never recovered.  That’s being seen now in these revisions.  At the end of this week, we are going to see bench mark revisions to retail sales. . . . So, you are going to see some downside revisions to the retail sales.  You already have it with industrial production, and now you are going to have it with retail sales.  We are very close to turning negative with the first quarter GDP . . . We are in a recession now, and they would be inclined to call it that once they get a contracting GDP, and everything else is beginning to show that. . . . You are going to see a formal recession declaration not too far down the road.  It hasn’t happened yet, but it will.”

So, the Fed sold a grand lie since 2009 that there was a so-called recovery, and there was no real recovery? Williams says, “Effectively, yes.  There was a little bit of a bounce up, but the other numbers show we never really had a recovery . . . They don’t want to come out with a negative forecast, but everybody knows it’s not recovering. . . . The economy is turning down rapidly.  We have a new recession.”

Williams says it is not a matter of if, but when, there is panic dollar selling. Williams says the Fed would try to slow it down.  Williams explains, “The Federal Reserve would step in and slow the pace to make it not appear like a panic.  If you start to see a panic selloff (in the dollar), that’s a real bad sign.  It means they are losing control of the system, and I think that is coming.  The initial effect on the system for people living in the United States, as the dollar crashes, you will see inflation beginning to surge, particularly from oil and gasoline prices.  Those effects will begin to spread in the system.  It will change the way people look at things and will start the process that will eventually be a hyperinflation.  The Fed does not have a way out of this circumstance.  They have backed themselves into a corner.  They have been keeping things reasonably stable, but they can’t get things going in the economy. . . . The economy is in terrible shape.”

Join Greg Hunter as he goes One-on-One with economist John Williams, the founder of ShadowStats.com.

There is free information, analysis and reports on the home page of ShadowStats.com. You can also subscribe by the half year and full year to get detailed weekly reports and analysis from economist John Williams.  Click here to subscribe.