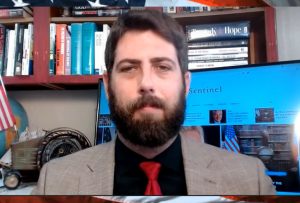 Author of the popular book “Deep State” and award winning journalist Alex Newman says Deep State globalists’ number one worry is the truth about the 2020 Election fraud getting out to the public.  Newman explains, “We have the same issue that we have had since 2016.  The Deep State, the establishment is absolutely terrified of Donald Trump.  They are terrified because they don’t control him, and he does represent a threat to the system.”

The audit in Maricopa County, Arizona, is just wrapping up hand counting 2.1 million ballots.  There is more work to do, but preliminary results are coming out soon.  There are several other states that are proceeding with election audits modeled after Arizona’s, and many more states are strongly considering it.  Let’s start with the active election audit case in Georgia.  Newman says, “This is still proceeding in Georgia.  The Deep State is worried about what’s happening in Michigan.  Donald Trump just put out a statement yesterday, that you will not hear about in the fake media, criticizing the two state senators standing in the way of a proper audit, a forensic audit in Michigan.  They worry about Wisconsin.  They are really worried about Pennsylvania because the evidence is so massive and so overwhelming.  They are also very worried that Arizona is going to be the domino that sets off all the other dominos. . . . If the truth comes out about what really happened in the 2020 Election, a whole lot of these people are going to end up in jail.”

Newman says every big problem we see today is simply part of the Deep State agenda to destroy America.  From the lie of Critical Race Theory, open borders, the plan-demic and experimental CV19 so-called vaccines, the violence of BLM and Antifa, and, yes, election fraud, these are just a few of the problems facing America and the world caused by the Deep State.  The Deep State actors do not care what laws they break or what crimes they commit to cause the total destruction of America.

Newman contends, “If the string continues to unravel and it goes back to the highest level, people will find out this was the biggest crime perpetrated against our country in History.  That’s what they are terrified about.  One of the ways you know this is the only time election audits are mentioned in the fake media, and this includes the controlled opposition FOX News, is to dismiss it and say it’s a conspiracy theory.  The MSM is calling it a ‘fraud-it.’  They have tried to sue to get it stopped.  The “Deep State” is absolutely terrified of what this Arizona audit represents.  That’s why we are seeing what we are seeing.”

In closing, Newman says, “I think it is highly significant that President Trump is saying he is still not conceding the Election.”

(There is much more in the 37 min. video interview.)

Newman also has his own website called LibertySentinel.org. There is lots of free information and articles there.

To support Alex Newman with donations or buy other products and books, click here.