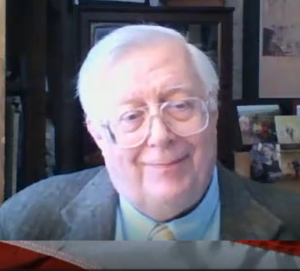 Economist John Williams says be careful what you wish for when it comes to Federal Reserve interest rate cuts. Williams explains, “Unless you can get a good healthy consumer, you are not going to get a good healthy economy. It’s that simple. I think the Fed recognizes that, but they want to get rates higher because that will help the banking system. It will help make lending a little easier and start to return the system to normal. The problem with them backtracking now is the Fed may not ever be able to go back and do what they did before. We may be entering a period of perpetual quantitative easing (money printing). That changes the ballgame, and I am not sure where that’s going to go. It’s not as happy as it would have been if we had gone through a transition where bad parts of the banking system failed and you rebuilt and had a strong buildup from there with the economy and everything else. . . . Perpetual quantitative easing (money printing) is frightening, and it’s a new world. No one has ever seen anything quite like this.”

Williams says all his data is showing the economy is already faltering. Williams point out, “If you believe the GDP numbers, the economy has expanded 25% since the Great Recession, but there is no other number that shows that. . . . I have been contending that we are heading into a new recession. What I am looking at in recovery is that the economy has never really recovered. . . . . The Fed raised rates too much in too fast of a period of time. Had they stretched that over a couple of more years instead of trying to get things back to normal in two years, that might have worked better. What they did was effectively crashed the economy.”

On top of that, Williams just had a research study where he asked USAWatchdog.com viewers to email him about the economic situation they see in their home towns all across America. A street level view from people in 33 states was sent in, and Williams found, “It varies by state and it varies by region. The point is it is not uniform, and if you look at the responses, we had most that came in were negative. It was roughly 2.7 negative to one positive.”

So, yet another expert is warning of a slowing economy and money printing to try to fix it all—again. Williams warns, “I can tell you why I would buy gold. You are seeing something here that is extraordinarily dangerous. It doesn’t have a happy ending for the traditional markets. . . . Back when the S&P downgraded the Treasuries, I believe in 2009, Alan Greenspan, who was no longer Fed Chairman at the time but was very vocal, said that was nonsense. He said there was zero risk of the U.S. defaulting on its debt because all the debt the U.S. owes is in dollars. We can print as many dollars that we want, and he’s absolutely correct. . . .The fact that you are making the bonds worthless by devaluing the currency I think is effectively a default, but not a formal default. . . . Greenspan said we can print any number of dollars we need, and that’s exactly what they did to the currency in Venezuela, Zimbabwe and the Weimar Republic. That gives you hyperinflation.”

There is now more free information on ShadowStats.com. If you want to get even more detailed, original, cutting edge economic data, click here to become a subscriber.

Don’t forget to email John Williams if you want to participate in his street level economic reporting project.