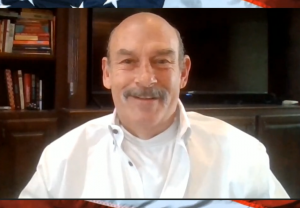 How bad is the global debt problem?  Holter says, “I’ll just give you just one number.  Global debt is now $273 trillion.  (In the 2008-2009 debt crisis, global debt was about half that.)  With that $273 trillion in debt, can interest rates ever go up?  They cannot allow interest rates to ever go up.  They can never taper balance sheets.  They have to put their foot on the accelerator and push it through the floorboard to keep this thing alive.  That debt has to be serviced.”

What’s going to happen to gold?  The price is going way up.  Holter says, “If you divide the U.S. national debt by the amount of ounces the U.S. Treasury says it holds, you get an astounding $100,000 per ounce price for gold.”

Holter says, “Get solar panels, generators or whatever.  Put back some food.  Expect the system to go down because, mathematically, it is going to go down.  You also want to protect yourself financially by getting out of the system and become your own central bank.  In other words, store your own savings.  Don’t rely on your brokerage account.  What happens when the markets don’t open?  What happens when your brokerage goes out of business or goes bankrupt?  Now, you are going to be tied up for three to five years.  Just become as insulated as you can.”