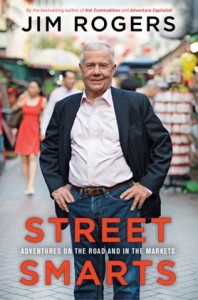 Famed investor Jim Rogers says, “This is the first time in recorded history all the banks are printing money at the same time. . . .   This is the first time we’ve had massive debasement, and it’s going to end very badly no matter what they say.”  Rogers, who has written books on global investing, says, “Whether they keep printing or stop printing money globally, it is going to end badly.”  If money printing stops, Rogers contends, “Banks are not going to be lending.  Financial markets are going to go down.  Currency markets are going to be in great turmoil.  It’s not going to be any fun.”  And if the money printing continues, Rogers says, “You’ve got bubble in some sectors, you have inflation, and then you have interest rates going up.  Currency markets are in turmoil, and it’s a mess because printing money is artificial.  It’s never worked.”  As the economy slows down, Rogers predicts, “They’re going to take money wherever they can. . . . They’re going to take our bank accounts and retirement accounts.”  Rogers concludes by saying, “We’ve had perilous times, and it’s going to get worse. . . It’s coming, be worried, be careful.”  Join Greg Hunter as he goes One-on-One with Jim Rogers, author of “Street Smarts, Adventures on the Road and in the Markets.”