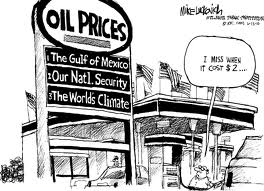 It seems every chance the mainstream media (MSM) gets, it tells us things really aren’t that bad.  For example, the headline from the Associated Press (AP) said, “Consumer prices on the rise, but inflation outlook is benign.”   Who approves the headlines at the AP?  Prices are rising, but there is no inflation?  Aren’t rising prices the main ingredient of inflation?  The story goes on to say, “Consumer prices rose modestly in January on higher costs for food, gas, rent and clothing.  But economists downplayed the increase, saying inflation will likely ease in the coming months as prices for raw materials level off.”  (Click here for the complete AP story.)

I wonder where the people who write for the MSM shop for groceries and buy their gasoline.  Maybe they have a time machine and magically go back where prices are a lot lower for everything.  But for those for us eating and heating our homes today, things are not getting cheaper and inflation is a problem!  Look at this from a different AP story where the headline says it all, “Gasoline prices are highest ever for this time of year.”  The story goes on to say, “Gasoline prices have never been higher this time of the year.  At $3.53 a gallon, prices are already up 25 cents since Jan. 1. And experts say they could reach a record $4.25 a gallon by late April.  ‘You’re going to see a lot more staycations this year,” says Michael Lynch, president of Strategic Energy & Economic Research. “When the price gets anywhere near $4, you really see people react.”  (Click here to read the complete AP story.)

Do the writers at the AP read their own stories?  Do these reporters not talk to each other or read the rundown (a list of stories every reporter is working on.)  Do the editors for the AP not want some sort of continuity?  I don’t have the answers to any of these questions, but those are the ones I am asking to myself.  In another story from CNBC a little more than a week ago, the headline read, “Get Ready for $5 Gas This Year: Ex-Shell CEO.”   (Click here for the complete CNBC story.)   Do you think this is signaling the “inflation outlook is benign”?  Oh, Iran just cut off oil exports to French and British firms.   A report from Reuters said, “Iran has stopped selling crude to British and French companies, the oil ministry said on Sunday, in a retaliatory measure against fresh EU sanctions on the Islamic state’s lifeblood, oil.”  (Click here for more on the Reuter’s story.)  This is around 700,000 barrels a day cut off to the EU from Iran.  Do you think this will make gasoline cheaper in the coming weeks and months?  This is financial war, but what if there is a shooting war?  You think gasoline prices will be heading south or go up to that $5 a gallon mark?

“Inflation outlook is benign.”  I don’t think so, and neither does economist John Williams from Shadowstats.com.  The Federal Reserve concentrates on what it calls “core” inflation.  That’s just about everything except energy and food.  I don’t know who lives without energy and food at their “core,” but this is what the Fed focuses on as its main predictor of inflation.  In his latest report, Williams said, “On an annual basis, “core” CPI-U inflation moved higher for the 15th straight month, up to 2.28% in January, from 2.23% in December.  When Fed Chairman Bernanke used his jawboning in a successful effort to debase the U.S. dollar in the global markets, in advance of announcing QE2 in November 2010, annual “core” inflation was at 0.61%.”   (Click here for the Shadowstats.com home page.)  So-called “core” inflation has more than tripled since late 2010 and “Inflation outlook is benign”?

By the way, if inflation was computed the way it was in 1980 by the Bureau of Labor Statistics, it would be 10.5% annually according to Shadowstats.com.  It is said a picture is worth a thousand words; in this case it’s a chart from John Williams.  As I finish this post, ask yourself, where do you think inflation is headed?