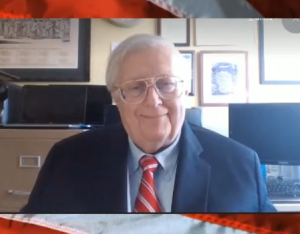 Economist John Williams, founder of ShadowStats.com, says the Federal Reserve has painted itself into such a tight corner with the economy it really has only two choices.  Williams says it comes down to “Inflation or Implosion.” What would happen to the financial system if the Fed stopped printing massive amounts of money for stimulus and debt service?  Williams explains, “You could see financial implosion by preventing liquidity being put into the system.  The system needs liquidity (freshly created dollars) to function. Without that liquidity, you would see more of an economic implosion than you have already seen.  In fact, I will contend that the headline pandemic numbers have actually been a lot worse than they have been reporting.  It also means we are not recovering quite as quickly.  The Fed needs to keep the banking system afloat.  They want to keep the economy afloat.  All that requires a tremendous influx of liquidity in these difficult times.”

So, is the choice inflation or implosion?  Williams says, “That’s the choice, and I think we are going to have a combination of both of them.  I think we are eventually headed into a hyperinflationary economic collapse.  It’s not that we haven’t been in an economic collapse already, we are coming back some now. . . . The Fed has been creating money at a pace that has never been seen before.  You are basically up 75% (in money creation) year over year.  This is unprecedented.  Normally, it might be up 1% or 2% year over year.  The exploding money supply will lead to inflation.  I am not saying we are going to get to 75% inflation—yet, but you are getting up to the 4% or 5% range, and you are soon going to be seeing 10% range year over year. . . . The Fed has lost control of inflation.”

When will the worst inflation be hitting America?  Williams predicts, “I am looking down the road, and in early 2022, I am looking for something close to a hyperinflationary circumstance and effectively a collapsed economy.”

Join Greg Hunter of USAWatchdog.com as he goes One-on-One with John Williams, founder of ShadowStats.com.

There is much free information on the homepage of ShadowStats.com.

For detailed hard hitting original analysis, like John Williams’ brand new report detailing the extreme inflationary trouble the economy is in, you can become a subscriber by clicking here.

To give your local economic report to Williams use [email protected] .