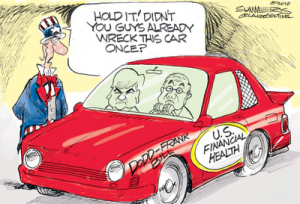 I have been saying for months the path the country will ultimately take will be the inflation path.  Yes, I know we have had some deflationary signs in the past.  The financial meltdown of 2008 would have been a deflationary event if the government had not stepped in with cash.  There was the $700 billion TARP fund, the $860 billion stimulus bill from Congress, and lots of money printing and toxic assets purchased by the Federal Reserve to the tune of around $1.7 trillion.  Oh, and let’s not even talk about the ongoing black hole of liability that Fannie and Freddie represent to the country.  It is more than $6 trillion.  Not even a mention of this in the new financial regulation passed yesterday.  Talk about denial!

What’s happening now is all this cash had been pretty much used up.  The latest report from Shadowstats.com confirms the renewed downturn America is facing.  It said, “The signs of a renewed or intensifying economic downturn continued to mount, with weaker than expected reporting of June retail sales and a worse than expected May trade deficit.  June retail sales fell for a second straight month, and, dependent on Friday’s CPI reporting, the May and June numbers showed an annualized real (inflation-adjusted) contraction of about 7%. . .”

June retail sales are down “about 7%!”   Yikes!  What will the Fed do?  For a clue, this story from My Way News, “With risks growing, Fed officials at their June 22-23 meeting saw the need to explore new options for bolstering the economy. That’s a turnaround from earlier this year when they were moving to wind down crisis-era supports. . . .  if the recovery were to deteriorate, Fed policymakers have options. They could revive programs to buy mortgage securities or government debt. They could lower the rates banks pay for emergency Fed loans. The Fed also could create a new program to spark more lending to businesses and consumers in a bid to lure them to ratchet up spending and grow the economy.”  (Click here for the complete story.)

There are plenty of folks who think the U.S. economy is a Ponzi scheme.  You know what happens to those things.  They all eventually collapse because they can no longer grow fast enough to cover the cost.  That’s the mindset of a recent article from The Market Ticker.  It said, “When the scheme is early in its run everyone thinks that it will be no big deal, because at the time it isn’t.  But when it gets later on everyone is terrified at the prospect of accepting the losses that must be taken, because they’ve gotten so large. . .  In this case we’re now to the point where restoring fiscal balance across the credit system requires a roughly 60% contraction in both outstanding credit and the size of the Federal Government (in terms of dollars.)  That in turn will contract GDP by 40%.  I understand this sort of prescription is considered politically unacceptable.

But math doesn’t care about politics.  It simply accumulates more damage, day by day, until we accept the math – and the truth.  The gap has reached a size that is mathematically impossible to grow out of through expansion of GDP.”  (Click here for the complete story.)

What we are doing now is making matters worse for most people.  However, some are profiting greatly from all the debt and money printing.  Back in October, I wrote, “Is The American Empire Being Looted?”  I said, “I don’t know if all the trillions created and spent is just waste, incompetence or downright fraud.  It is probably all of the above.  It really does not matter because, in the end, the outcome will be the same.  The dollar will be diminished, and the credit rating of the U.S. will be destroyed.  In the Great Depression, the value of the dollar and the “Full Faith and Credit” of the country were never in question.  I predict, before this financial crisis is over, both will be looted from the American Empire.”

In the end, we will have a currency crisis, and that means almost everything will cost more.  (Housing will cost less as interest rates rise.)  We are becoming an inflation nation.  It’s a place where the vast middle class will become poorer as the dollar becomes devalued.