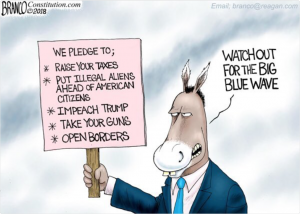 French President Emmanuel Macron was in Washington this week to visit President Trump. One of the big issues that was no doubt talked about was Trump cancelling the so-called Iran nuclear deal.  Macron also was selling the New World Order (NWO) to Congress, and Democrats and some RINO Republicans were lapping it up.  The New World Order politicians are under global attack from conservatives, but they are not dead yet.  The Democrats are really nothing more than the George Soros backed NWO party, and that should scare “We the People.”

Possible 2020 presidential candidate Bernie Sanders is already floating his Marxist ideas of federal jobs for all. Of course, nobody has talked about who is going to pay for all these jobs that, according to Sanders, will pay a minimum of $15 an hour.  Sanders and other Democrats are pitching other “free” stuff like health care and college, but we all know it’s not free.

Big banks are still in big financial trouble, and one of the most dire is Deutsche Bank (DB). It is laying off 400 investment bankers, and that is not a sign of good financial health.  The IMF considers DB as the most systemically dangerous bank in the world.  Is DB the financial canary in the coal mine?

Join Greg Hunter as talks about these stories and more in the Weekly News Wrap-Up.