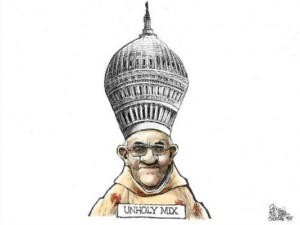 On his first visit to the U.S., the Pope is acting more like a left wing politician than a messenger of Christ. He has scolded Congress on everything from global warming to immigration. Most of his criticism is directed at Republicans though. There was not a single criticism given to the Castro regime in Cuba, and last I checked, their government is communist and atheist. I have been following the intense coverage and reading the Pope’s quotes, and I have yet to hear one public mention of Christ. I am a former Catholic that left the church after the pedophile priest scandal and the cover-up that went all the way to the Vatican. I like Catholics and have no problem with the main points of the Catholic Doctrine. The five main parts of the Catholic Doctrine are: Christ is the Son of God, Christ was born of the Virgin Mary, Christ died on the cross and shed his blood for the sins of the world, Christ rose again from the dead, and Christ will come again to judge the living and the dead. Please notice how ALL five major points of the Catholic Doctrine (which I totally agree with) are centered on Jesus Christ. While the Pope has mentioned God a few times in his public quotes, I have not heard a single quote that mentions the name of CHRIST.  WHY??????  I don’t know if it is because the Pope just forgot to do so, or if he would like to see a one world religion, and of course there is no place for “God the Father and his Son Jesus Christ” in a one world religion. One thing is for sure, the omission of Christ’s name on an historic trip by the Pope this big is “too stupid to be stupid.”

The other big visitor is the Chinese President Xi Jinping. Please note his first stop was not Washington, D.C., but Washington State. The Chinese President all but demanded the top tech Titans come for a meeting under the veiled threat of increased government scrutiny on companies doing business in China. He also inked a deal to buy 300 Boeing aircraft. In addition, he made the point that China was also a victim of hacking. Hacking has been a thorny issue with the Obama Administration. One of the big hack attacks blamed Chinese hackers for stealing data on more than 20 million federal employees. Obama has threatened sanctions, which I am sure is why the Chinese President made a big public announcement about buying Boeing aircraft. Another very weird thing that happened this week is the reported widespread outages from companies such as Facebook, Netflix, Amazon, Skype and Yahoo. All these companies have huge redundant systems, and for all of them to have widespread global outages while the President of China is in the U.S. seems a little weird and more than just a coincidence.

Russia is ramping up its presences in Syria and now says it will go on the attack against ISIS with or without the help of the Obama Administration. The Russians will enlist the help of the Iranians and Hezbollah. There is also talk of the Chinese coming in on the side of Russia in eradicating ISIS. I do not know how much help the Chinese will give in this effort, but the U.S. effort is a total disaster, and it is so bad I wonder if it was not designed to fail in the first place. There is not much the Obama Administration can say with a policy against ISIS. The U.S. appropriated $500 million to train so-called moderate rebels, and so far, it has trained five, yes five, as in the number right after four. Checkmate for Putin with his move against ISIS while Obama continues to look like a disheveled amateur in terms of foreign policy.

Hillary Clinton’s email troubles have been kicked into critical condition with the announcement that the FBI has recovered more than 30,000 emails from the server that was supposedly wiped clean. It is very hard to believe her story that those more than 30,000 emails she had on her private server while Secretary of State are only about things such as yoga and Chelsea Clinton’s wedding, as she claims. I can’t tell you how many possible felonies surround the evidence on this server. Benghazi, the Clinton Foundation, classified documents, and possible hacking by foreign governments are the foundation of just a few of the possible criminal charges that could come up and these emails are revealed. I have said it before months ago, and I will say it again, Hillary Clinton will not be President let alone the Democratic nominee.