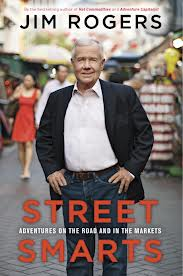 Renowned investor Jim Rogers thinks the Ukraine crisis is a big negative for the U.S.  Rogers says, “It’s certainly not helping the United States.  This whole thing in the Ukraine started when the U.S. instigated a coup.  We have our own diplomats on the phone talking about instigating a coup.  We instigated a coup and the Russians naturally reacted.  I mean, if Russia instigated a coup in Canada, I assure you the U.S. would have reacted.  So, Russia reacted, and now he’s (Obama) gotten us into a situation where we’re doing something and they’re doing something; and, of course, this is pushing Russia and China closer together, Russia and other countries closer together, and I don’t know what we’re getting out of it except another embarrassment.”  Could the sanctions backfire on the U.S.? Rogers exclaims, “In my assessment, of course.  This is now pushing Russia closer to Asia more and more.  If Russia cannot buy things from the West, they are going to buy them from Asia.  If you look at a map, you can see Russia has gigantic borders. They have many neighbors who will trade with them no matter what the U.S. says, and they have plenty of people who they can sell to.  I mean, sanctions are not going to hurt Russia at all.  They may hurt some of our allies and even us as bad as they are hurting the Russians.”

Rogers goes on to say, “We may be pushing them away from Europe.  The Europeans don’t seem to have any great appetite for this, especially since the initial coup was instigated by the U.S.   Now, we are blaming the Russians when we started the whole thing.  John Kerry sits around talking about international law and all the rest of it, and we started it. . . . I don’t understand this; it’s not helping us or the world.”

Could the Ukraine crisis hasten the fall of the U.S. dollar?  Rogers says, “This is certainly causing more people to worry about using the U.S. dollar.  The Americans have said they are going to put all these sanctions on the Russians. Suddenly, the Russians cannot trade or clear U.S. dollars, they’re going to look for something else.  Many countries are already looking for something else.  Let’s say you put Russia and China and Iran together, those are three big players in the international financial markets, because of oil if nothing else in Iran’s case.  This just pushes people further away from the U.S. dollar.  I don’t like saying this because I am an American, but the U.S. dollar is a terribly flawed currency.  We’re the largest debtor nation in world history, and now we are telling people you’d better be careful if you use the U.S. dollar.  We may take it away from you.  We may block you.  Of course, people are going to look for an alternative.”

Is Rogers afraid of a systemic crash in the global economy?  His reply, “Aren’t you?  I don’t think it will happen over Ukraine, but it could because politicians do very foolish things.  But as this whole world develops with tensions and sanctions here and sanctions there, probably not this year, but maybe next year or the year after, of course, something is going to go wrong.  We’re all going to pay the price.  This is the first time in recorded history that all the central banks are printing huge amounts of money.  That’s never happened before, and we’re all going to pay.  There is this huge ocean of liquidity rising.  It’s going to end someday one way or the other, and it’s not going to be fun for any of us.”  Rogers goes on to explain, “There’s going to be currency turmoil, interest rate turmoil and, ultimately, stock market turmoil.  Some stock markets are making all-time highs based on this ocean of liquidity.  When that ends, and some emerging markets are already suffering because they have been financing themselves on these artificial interest rates and artificial liquidity, it’s going to affect all of us, including the U.S. stock market.  I don’t know when it’s going to happen because I am a terrible market timer, but I know it’s going to happen–it has to.”

Rogers is also a best-selling author that most recently wrote the book “Street Smarts: On the Road and in the Markets.”  Where is he investing his money?  Rogers reveals, “I own real assets.  I own agriculture.  As you may know, agriculture is going through the roof this year.  I suspect that is going to continue because war and tensions are not good for anything, but they are good for commodities and especially agricultural commodities.  These days, the fundamentals are so out of balance for agricultural supply.  I do own gold and silver, but I am not buying any at the moment, but I am looking for real assets.”

Not only is Jim Rogers a world famous investor, but he has also written several books.  His most recent book is called “Street Smarts: On the Road and in the Markets.”  If you’d like to buy a copy of this book, please click here.