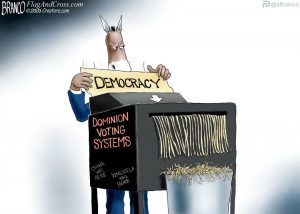 Sidney Powell, another top former federal prosecutor on the President’s team, says Dominion voter machines were also used in electronic voter fraud on a nationwide scale.  Powell said the Dominion voting system was used, and it was imported from Venezuela and owned by people who are friends of the communist government.  Powell also charged, “There was massive money influence of communist Venezuela and China” in effort to get a Biden win.

Join Greg Hunter of USAWatchdog.com as he talks about this hugely important story that will guide the future of America and liberty.

Economist John Williams of ShadowStats.com will be the guest for the Saturday Night Post.  He will talk about the state of the economy no matter who wins the 2020 Election.