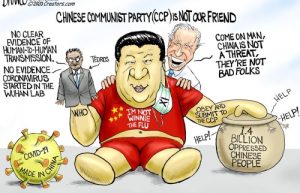 Donald Trump made the first move to reopen America for business by announcing a three phase plan to do it on or about May 1st. The state governors will lead the way in their individual states, but many states that are not hard hit will reopen earlier using precautions already established, and, yes, restaurants will open, too, but they will have less tables because of social distancing required. As new Covid 19 infections decrease, so will the restrictions. Some hard hit states, such as New York, will stay on lock down until mid-May.

There is no doubt that China caused death and economic destruction because of how it handled the Coronavirus outbreak in Wuhan. The leaders in Communist China covered up the problem with the help of the World Health Organization (WHO). China restricted flights from Wuhan inside of China but allowed flights from Wuhan to go anywhere else in the world. The dire consequences were covered up and lied about, which has caused the entire world to go into an economic tailspin. The world’s view of China has been changed forever, and expect manufacturing to leave China and return to the USA.

Even though President Trump is starting to open America up again for business, the economic damages have already been done, and it’s not over. Unemployment has increased by 22 million in the last four weeks alone. Even if everything opened up tomorrow, there is still the massive destruction of demand in everything from energy, restaurants, consumer products, cars and housing, to name a few.

With the economic news so dire, I am bringing money manager Michael Pento back for an update. It’s good the economy is opening back up, but severe damage has been done that is going to be long lasting. Pento will explain why our economic problems are far from over.