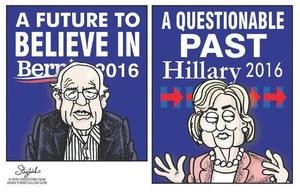 News broke this week that the FBI is getting ready to interview top aids to Democratic front-runner Hillary Clinton. It is also reported that Clinton herself may also be interview by the head of the FBI, James Comey.  Comey is taking point on the Clinton investigation.  This is not the first time Comey has been a part of an investigation into the Clintons.  Early in his career, Comey was part of the Whitewater case.  Time Magazine reports, “Comey and his fellow investigators concluded, (What the Clintons did) . . . ‘constituted a highly improper pattern of deliberate misconduct.” Comey is a former top federal prosecutor, and I think this case is far from closed.

Meanwhile, most of the mainstream media (MSM) continues to ignore or underplay this story. How the Democratic frontrunner involved in a massive investigation, with 150 agents that is being led by the head of the FBI, is not a story that should be reported on, is too stupid to be stupid.  The MSM is trying to shield Clinton because they have ceased being news organizations.  Instead, with the exception for a few outlets, they are nothing more than political spin organizations.  They promote the ridiculously good stories and cover up fraud and crime like it’s not happening.  And when it comes to coverage of Donald Trump, it is one negative story after another.  This is an attempt to keep the “Criminal Crony Class” in power for both parties that keep sucking the blood out of America.

There are more reports out this week about how the Pentagon is helping Kurdish fighters against CIA backed ISIS and al-Qaeda fighters. This, only months after famed journalist Seymour Hersh broke the story late last year on how the Pentagon secretly passed intelligence information to help the Assad regime against ISIS.  You cannot make this up.  On top of that, the Iraqi army is coming to a standstill against ISIS in Mosul.  So much for ISIS being junior varsity or weak.  Finally, the Obama Administration has admitted that what ISIS is doing in the Middle East is genocide.

The Fed continues to talk down the possibility of raising interest rates despite claiming it would raise rates four times this year. Fed Head Janet Yellen is out again this week, and basically told Wall Street that the Fed has their back.  The Fed knows if it raises rates, the very weak economy will tank.  The Fed cannot raise rates unless it wants to crash the economy.  It is that simple.