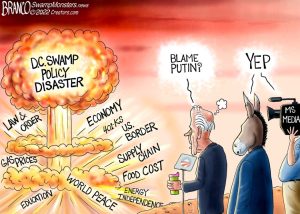 As the say in the hood, “paybacks are a m##########r.”  This perfectly describes the payback that Russia is delivering to Ukraine this week in the aftermath of blowing up a big chunk of Kerch Bridge that joins Russia with Crimea.  Russia has set off a huge wave of air attacks throughout Ukraine, which is something it has not done since the start of the invasion.  That’s not the only escalation.  Last week, Putin assigned a new general to take command of the Ukraine war.  He is described as “ruthless and brutal.”  This is a sign the gloves are off in Ukraine.  This conflict has been taken up several notches, and it is not going to end anytime soon.  Both sides are now calling each another terrorists, and the West is sending even more money and weapons to Ukraine.

Former Congresswoman Tulsi Gabbard announced this week that she is quitting the Democrat Party. Gabbard says, “Today’s Democratic Party is now under complete control of an elitist cabal of warmongers driven by cowardly wokeness . . . and it is anti-white.”  Gabbard is now stumping for retired army general Don Bolduc who is the Republican candidate for the U.S. Senate in New Hampshire.  AOC is also taking heavy criticism recently in her New York City Congressional district about inviting and funding nuclear war in Ukraine.  By the way, Biden’s real approval rating is now down to just 9%, according to my confidential source.

The most recent inflation numbers have come out, and the news is not going to help Democrats win the midterm elections.  The government says the official number is 8.3%, but everybody knows the government numbers are a lie.  The current inflation number over at ShadowStats.com is the true inflation number, and it’s 16.5%, which is at a 75-year high according to economist John Williams.  Mortgage rates are now just below 7% for a 30-year home loan, and the Fed is vowing to keep raising rates until the inflation subsides.  What’s going down first?  Inflation or the entire economy?  It’s looking more and more like the answer is the entire economy.  Greatest Depression here we come, weeeeeeeee!!!!!!!

There is much more in the 56-minute newscast.

Join Greg Hunter of USAWatchdog.com as he talks about these stories and more in the Weekly News Wrap-Up for 10.14.22.

Financial expert and publisher of “The Solari Report,” Catherine Austin Fitts, will be the guest for the Saturday Night Post.  She will give us the latest on the globalists’ plans, the economy and the rumors of war—everywhere.