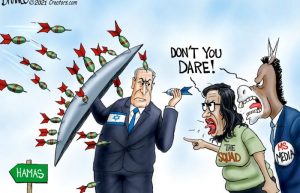 Looks like there is a truce between Israel and Hamas in Gaza.  I say “looks like” because truces between the two usually take a while to solidify.  That’s been the case in the four Hamas/Israel wars since 2008.  More than 1,300 houses have been destroyed, and heavy losses have been inflicted on Hamas in Gaza.

Is your employer requiring you to get an experimental gene therapy CV19 jab that is being called a “vaccine”?  You might want to know it’s illegal to require someone to get an experimental vaccine.  The U.S. government is not requiring this so-called vaccine, and about half of the CDC and FDA employees have NOT gotten the jab.  There is a new form you can hand to your employer from Solari.com that might get their attention.  It puts the liability for adverse effects of the jab squarely on the company’s back.  It also requires the responsible company official to sign this form with a witness.  The vaccine makers have zero liability, but companies forcing the CV19 jab do have liability.  This is a cold bucket of water in the face of any company who wants to force or coerce employees to get this experimental “vaccine.”

If you think the economy is going to get back to normal now that the CV19 crisis is subsiding, you have got another thing coming.  There are shortages in everything and inflation coming bigtime.  It appears the Federal Reserve is printing mad amounts of money, and the inflation genie is already out of the bottle and getting stronger by the day.  Hunter will explain.

Join Greg Hunter of USAWatchdog.com as he talks about these stories and more in the Weekly News Wrap-Up for 5.21.21.

John Williams of Shadowstats.com will be the guest for the Saturday Night Post.  He will give you the real numbers on the inflation monster that is coming and coming soon!!