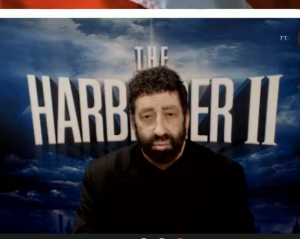 Five time, best-selling author and renowned Christian leader Jonathan Cahn says if America does not come back to God, it may never recover from what is coming.  Cahn, who wrote the best- selling book “The Harbinger” back in 2012, predicted when the next great shaking would happen.  Cahn explains, “America is getting hit economically and, of course, the virus and the lockdown.  We have never had anything like it, civil disorder, and we have never been hit like this before. . . . The Harbinger gives a period of time from the Bible, from the judgement and fall of Israel.  It gives this period of time, and it pinpoints the year 2020. . . . For years, I have been looking at this year wondering if this was going to be a year of economic collapse, of shaking and more than that.  I don’t believe the shaking is finished. . . . Overall, I believe the shakings are not finished.  I believe this is just the beginning. . . . A nation is given a window of time to come back to God or go to destruction, disintegration or judgment.  That’s where we are.”

Cahn says, “The answer of Passover is the Lamb.  Who is the Lamb?  Jesus is the Lamb of God.  So, therefore, the answer to the plague, the answer to everything is Jesus.  He’s still the same yesterday, today and forever.  The media can say what they want.  Newsweek, New York Times, it doesn’t matter.  They are all going to be gone.  Jesus is still going to be as important 1,000 years from now as he was 2,000 years ago.  He is the answer.  Jesus is the Master of the Universe, and He is on the throne.  There is only one, and He is on the throne and He has no intention of getting off of it.”

Jonathan Cahn’s upcoming book is called “The Harbinger II The Return.”  It is predicting more very bad and mind blowing things for America if we, as a nation, do not repent and turn back to God the Father and Jesus.  “The Harbinger II The Return” also gives hope and shows the way forward.   This is why Cahn is asking everyone to start praying now, and he is organizing a “National and Global Day of Prayer and Repentance,” culminating on September 26, 2020.  Cahn says September is a pivotal month.

Join Greg Hunter as he goes One-on-One with best-selling book author Jonathan Cahn to talk about his upcoming book called “The Harbinger II The Return.”

To find out about the pre-order of “The Harbinger II The Return” click here.

To find out about the “National and Global Day of Prayer and Repentance,” in Washington D.C September 26, 2020, click here.